We are using cookies to improve your user experience. To continue using this website please accept that we are storing and accessing cookies on your device. To learn more about how we handle and process personal data, please see our  Privacy policy.

STOCKHOLM, Sweden: A PIONEERING project launched by the Ellen MacArthur Foundation today (Wednesday, June 12, 2019) will bring together major cities and multinational companies from across the food industry, to help create a circular economy for food.

The launch of the Ellen MacArthur Foundation Food initiative follows the publication of its report Cities and Circular Economy for Food, at the World Economic Forum in January 2019. The report concluded that to meet the dietary needs of a growing global population, while restoring biodiversity and addressing the climate crisis, the food system requires fundamental redesign.

At the EAT Forum in Stockholm, the Foundation announced it will work with a community of participant cities, as well as food industry companies including Danone, Mizkan, Nestle, Novamont, Veolia, and Yara, to develop circular economy solutions to the problems of today’s food system. In three Flagship Cities – London, New York, and São Paulo – the Foundation will lead major food system projects to demonstrate how a circular economy vision for food can be achieved at scale. It is the first time cities and companies have come together in this way. The three-year initiative is supported by Philanthropic Partner Calouste Gulbenkian Foundation. 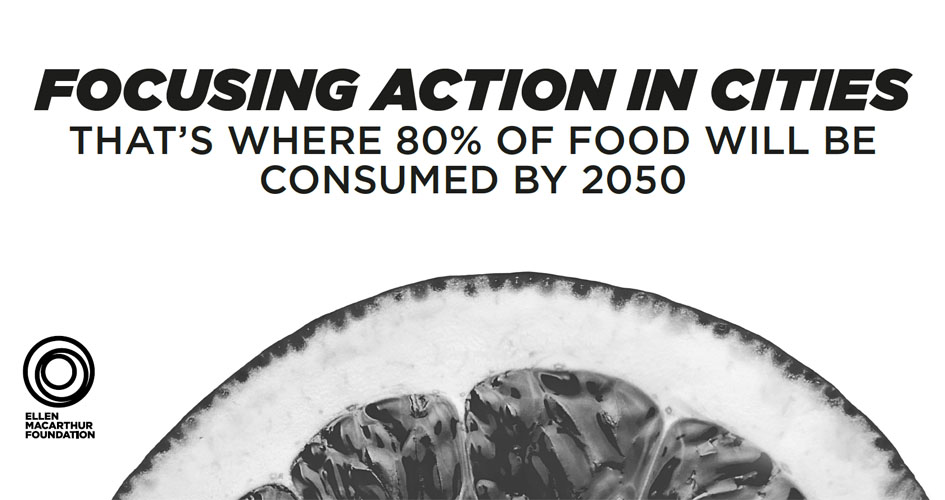 Food production is responsible for almost a quarter of global greenhouse gas emissions, and mismanaged fertilisation and manure exacerbate air pollution, contaminate soil and leach into water supplies. These factors, and others associated with today’s food system, mean even when trying to make healthy choices, consumers are at risk.

Dr Clementine Schouteden, Ellen MacArthur Foundation Food initiative lead, said: "By joining forces in this way, cities, and the businesses and people in them, can transform the global food system. We can grow food in ways that support ecosystems instead of damaging them. Food would be sourced locally, when it makes sense, and we would make the most of it, avoiding edible waste and using organic by-products to improve soil health. This is a unique opportunity to create a system which helps to tackle the climate crisis, restore biodiversity, improve human health, and reconnect people with their food, while creating new business opportunities."

The Food initiative will develop solutions in line with a vision of a circular economy for food based on three principles:

Source food grown regeneratively, and locally where appropriate
Producing food regeneratively to rebuild the health of the natural world, rather than degrade it.

Make the most of food
Food is grown, processed, transported, prepared, and by-products managed, in ways that benefit the health of people and natural systems. Food is designed to cycle, so by-products from one enterprise can help to improve soil health.

Design and market healthier food prducts
Waste is designed out and food products are created to not only be healthy from a nutritional standpoint, but in the way they are produced.

As set out in the report Cities and Circular Economy for Food, the benefits of this approach include reducing annual greenhouse gas emissions by 4.3 billion tonnes of CO2 a year, the equivalent of taking one billion cars off the road permanently, and avoiding the degradation of 15 million hectares of arable land per year. It could also lead to significant reductions on antimicrobial resistance, air pollution, water contamination and foodborne diseases. Cities can unlock an opportunity of USD 700 billion by reducing edible food waste and by cycling by-products and organic materials.

Wayne Hubbard, London Waste and Recycling Board (LWARB) CEO, said: “Being awarded Flagship City status is recognition of everything the Mayor, local councils and LWARB are already doing here to improve food outcomes for all Londoners. By working with the Ellen MacArthur Foundation to develop this circular economy approach, we will be able to do even more to engage and inspire businesses, consumers and other stakeholders across London to tackle the food challenges we all face.”

Mayor of Sāo Paulo City Bruno Covas said: “We are firmly committed to guaranteeing quality food for all São Paulo citizens and boosting sustainable development policies. São Paulo City is convinced the circular economy is a feasible alternative to the waste and pollution of the current food system. We have been working on initiatives to combat food waste, provide fresh and quality food for vulnerable populations, and improve production to market access. We are confident that through this Food initiative, and cooperation with the other Flagship Cities, we will contribute significantly to creating a circular economy for food.”

For more information or to request an interview please contact:
Ross Findon ross.findon@ellenmacarthurfoundation.org +44 7535 091 663

Notes to editor:
About the Ellen MacArthur Foundation
The Ellen MacArthur Foundation was launched in 2010 with the aim of accelerating the transition to the circular economy. Since its creation, the charity has emerged as a global thought leader, putting the circular economy on the agenda of decision-makers around the world. The charity’s work focuses on seven key areas: insight and analysis; business; institutions, governments, and cities; systemic initiatives; circular design; learning; and communications.
Further information: ellenmacarthurfoundation.org | @circulareconomy

About the Food initiative
Following a year-long analysis phase, the Ellen MacArthur Foundation launched the Cities and Circular Economy for Food report at the World Economic Forum Annual Meeting in Davos in January 2019. Over the next three years, building on the findings of that report, the Ellen MacArthur Foundation will, together with a consortium of key actors, stimulate a global shift towards a regenerative food system based on the principles of a circular economy.
To find out more and to download the report visit: tiny.cc/circularfood

Participant cities
To ensure the accelerated implementation and realisation of the vision, the Food initiative has gathered a group of Participant Cities, in order to demonstrate, inspire and share learnings, insights and work. The initial group is made up of Almere, Barcelona, Lisbon, Milan, Porto, Rio de Janeiro, Salvador, Sevilla, Toronto and Torres Vedras. Others will be invited to join.