Back to Stories archive
Features

Meet the people behind Action Africa, the initiative that enables 250.000 farmers, together with Yara, feed one million people for one year in East Africa.

“In March 2020, we could see that something radical was happening, and we wanted to make a difference looking into the future.” Øystein Botillen, Stakeholder Relations and Business Development Manager at Yara, saw the impending crisis due to COVID-19 as a moment for urgent action. His vision for using short-term assistance as a springboard for long-term prosperity had the potential to help farmers in East Africa survive the next year, while establishing a foundation for long-term food stability in the region.

“The world is changing rapidly, and is becoming more digital at the same time,” he says. “We wanted to use this opportunity to try to connect rural communities to the opportunities that digital technology offers to unlock vast potential for agricultural development on the continent.”

Øystein is intimately engaged with the region’s agricultural development, and he has a unique perspective on the opportunity this initiative presents to the people who live there. He has deep experience working with African communities, having visited the continent frequently through his almost 24 years of work in Africa , including the years he spent there raising his young family with his wife Åsne.

“Living with my family in Africa was a great thing. I believe that the six years my children spent in Africa is somehow going to define them as human beings. They will always carry Africa with them,” he says.

Øystein’s work in Africa began in 1996, and it has included everything from demining projects in Angola to Norwegian People’s Aid’s programs in the most tumultuous regions, facilitating agreements with top-level diplomats and presidents of multiple nations. Through it all, he went to great lengths to stay connected with his then wife-to-be in Oslo until Åsne – and their growing family – were able to join him in the field. 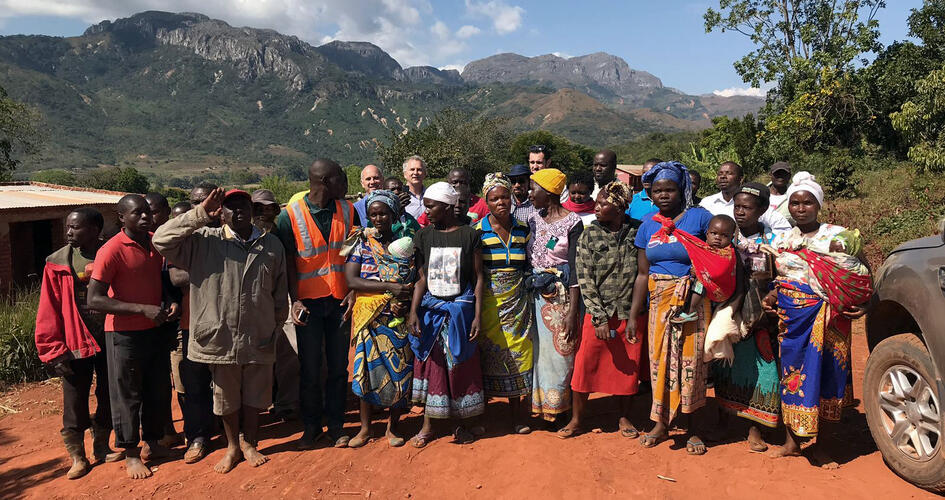 “I’ll never forget the day when the Head of Norwegian People’s Aid in Angola came to Malanje, where I stayed, and gave me this piece of paper that said: ‘Congratulations. You are becoming a father!” Øystein recalls. “In 1996, I didn’t have a phone I could just pick up and call and I was of course very eager to call my girlfriend. By coincidence that night, a bunch of Swedes came to the guesthouse and I told them about the news I had received. They had a satellite phone, you know, one of those first mobile phones the size of a suitcase. They put it up outside. It was completely dark outside with a sky full of stars, I remember, and I could suddenly hear the voice of Åsne in Norway.”

Although it has been, without a doubt, challenging to travel around the world with two little kids, along with experiencing and working with people in need, Øystein talks about his past with no regrets, “It is a combination of coincidences and not being afraid of uncertainty that finally brought me to Yara and the company’s Africa agenda and hence an opportunity to both apply what I have learned over the years as well as expand my horizons.”

In 2011, Øystein joined Yara to help drive the company’s Africa strategy, including development of new business models and partnerships that address the specific needs of African smallholder farmers.

“We needed to put something extraordinary in place.”

“As we speak, there is great uncertainty in almost everything, including also the future of food,” he says. He believes Action Africa can change that, with enough support from other players across the food system.

“This is not a small intervention; it’s a massive operation. I hope others will join us. The digital platform can enable us to provide agronomy knowledge and additional services at a scale never seen before.” By adding more partners to the platform Yara has created, he says, “We can provide more and meaningful support and services to more farmers.”

While Øystein is an adventurous and visionary man whose passion to help others improve their lives and plan for a better future leads to important work like Action Africa, he finds great contentment in simple moments, like riding his bike through the streets of Oslo on the way to the office. “I’m getting in at least a hundred km a week commuting to the office. For me, biking is a mental thing. I enjoy getting in that special mood,” he says. Like most sectors, cycling is not immune from the continuing shift towards digitalization and new technologies. Øystein is at least during cold winter months an enthusiastic Zwifter!

Perhaps this special mood brings Øystein the clarity that’s required to realize when the time is right for decisive, transformative action. He finishes:

“Moments in time like this that call out for transformational change come along rarely. When they do, we need to take advantage of them.”